The following are frequently asked questions of Wiser Sport. Please click the topic of any question to see our replies.

1. Is there any time limit for an official Wiser game?

Except for Phase I of Ball Serving, there is a one-minute time limit for tactical discussion for each team’s turn to attack. Otherwise, there is no time limit for an official Wiser ball game!

2. Is there any range/area limit for the playing field in an official Wiser game?

Except when two teams are contesting within the Capture Zone, the game area will be limited within the rectangular area of 12 m x 24 m. Otherwise, the playing field of an official Wiser game has no range/area limit and can be played based on whatever landscape is available.

1. Before ball serving, is it required in an official Wiser game to use the drawing of lots to determine which team will serve first?

For fair competition in an official Wiser game, the captains from both teams may draw lots to determine which team will serve first. However, for convenience, other methods like coin tossing or “rock, paper, scissors” can also be used during the regular games or practices to determine which team will serve first as long as the hosting organization and both teams agree these methods.

2. During ball serving, is it required to serve the balls to be positioned inside the 12 m x 24 m rectangular area enclosed by two teams’ serving lines?

There is no fixed direction, path, or distance for serving the ball. A ball can be served anywhere within the entire playing field. Balls do not have to be served and rest inside the rectangular area enclosed by two teams’ serving lines. (Please refer to General, Question 2)

3. During ball serving, is there any penalty for a player who serves and continuously hits the opponent’s balls—for example, should the player be eliminated if he/she served the ball and hit the opponent’s ball(s) three consecutive times?

According to the rules of ball serving, if the ball being served hits any ball of the opposing team or the player’s own team, the serving will be considered as “invalid”. The ball that got hit will be placed back to its original position. Then the player serving the ball will take back his or her ball and re-serve again. The referee may remind the player to be careful and not to hit any balls again when re-serving. However, so far there is no penalty for the player who serves and continuously hits the opponent’s balls. Therefore, the player won’t be eliminated if he/she serves the ball and hit the opponent’s ball(s) three consecutive times.

1. Does the one-minute time limit for tactical discussion by the attacking team include the time of launching the ball out by the team’s player?

2. When attacking, can the player arbitrarily request to move or temporarily pull up any flag(s) as long as the player considers that the flag(s) is/are blocking the intended traveling route of his/her attacking ball?

According to the rules, if the attacking player considers that any flag(s) in the playing field is/are blocking the intended traveling route of his/her attacking ball, the attacking player may request to temporarily relocate those flag(s). Only after the request has been approved by the referee can the flag person can move the flag(s) to another spot or temporarily pull up the flag(s) to clear the way for the attacking ball. Any flag(s) that was/were pulled up must be reinserted into its/their original position(s) after the attack is completed. Other than this rule, the player cannot use other reason(s) to request to move flag(s).

3. After a player has picked up the ball but has not launched the ball out for attacking or setting the ball, can this player put his/her ball back down to change the direction of attack or allow another player of his/her team to attack instead?

According to the rules, when a team has its turn to attack, the team has a tactical discussion of up to one minute to decide which player should attack. Once this designated player has picked up the ball and is ready to attack or set the ball, he or she is not allowed to put the ball down to change the direction of attack or to allow another player of his/her team to attack instead.

5. How can a locked ball of our team be rescued after the opponent’s ball that previously hit and locked it has been struck out by the ball(s) of our team (or due to a “Mishit”)?

For example, let’s say the Red 6 was hit and locked by the White 3. Later in the game, the White 3 was struck out from the game. To rescue the Red 6, the Red team has to hit any White ball (can be a contesting ball or a locked ball) to replace the struck-out White 3. However, the White ball(s) being hit cannot lock any Red ball(s) at that time. Otherwise, any Red ball locked by that White ball being hit must be rescued first.

6. Are there any priorities for rescuing locked balls?

If a certain number ball of Team A was hit by a ball of Team B, the priorities to rescue the “locked” balls of Team B are as follows：

(2) If this ball of Team A that got hit did not lock any ball of Team B, the hit it got can then be used to rescue the ball of team B that was locked by another ball of team A which has been struck out from the game. (Please see Question 5)

(3) If all locked balls mentioned in (1) and (2) above have been rescued, the hit on that ball of Team A can then be used to rescue the ball of Team B that was locked due to a “Mishit.” (Please see “How to Rescue a Ball Locked Due to a Mishit”)

The attacking ball hits more than one ball in one attack:

7. When a certain number ball of Team A attacked, it continuously hit more than one ball of the opposing team. Let’s say, for example, that in its attack, the White 1 first hit the Red 3 and then successively hit the Red 6. How should this situation be ruled? 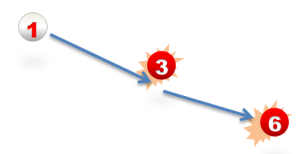 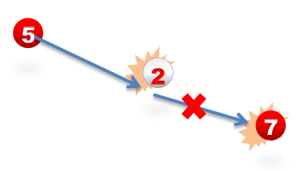 9. When a certain number ball of Team A attacked, it first mishit a ball of its own team and then successively hit a ball of the opposing team. For example, the Red 5 in its attack first mishit the Red 7 and then hit the White 2. How should this situation be ruled?

10. When a certain number ball of Team A attacked, it first hit a ball of the opposing team and caused the ball being hit to move and hit another ball. For example, let’s say the White 1 attacked and hit the Red 3. Then the Red 3 being hit has moved and hit the Red 6. How should the following situation be ruled? 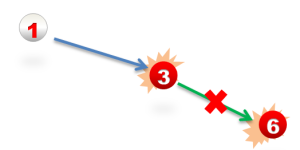 According to the rules, the first hit on the Red 3 by the White 1 is a valid hit, causing the Red 3 to be “first-locked” with a yellow flag. Subsequently, the “first-locked” Red 3’s hit on other ball(s) (the Red 6, in this example) is invalid.

1. Is it true that once the “Capture Zone” is set up, it will last until the end of the game and never be removed?

1. Is it true that only the captain of each team can issue the instruction for an “interception”?

According to the current rules, to prevent any confusion, only the captain of each team can issue the instruction for an “interception.”

2. When the opponent’s ball is attacking, our team can make an “interception.” Which team will attack next after the interception has been made?

3. If, when making an interception, the ball does not hit the opponent’s ball to be intercepted but accidentally hit another ball(s), is this still a valid hit?

Let’s say, for example, that when a Red ball is attacking, a White ball can make an interception. If the ball of the White team for interception does not hit the Red ball to be intercepted but unexpectedly hits another Red ball, this hit is still valid. However, if this White ball hit another White ball, it will be ruled as a “Mishit.”

4. Is there a time limit for a player to make an interception or any proper timing to launch the ball out for a successful interception?

According to the rules, there is neither a time limit for a player to make an interception nor any proper timing when a ball should be launched out for a successful interception.However, there are “valid” and “invalid” timings for an interception to be made, and these are described as follows:

(1) The player, in an attempt to make an interception, launched the ball out before the opposing team’s attacking player does

(2) The player, in an attempt to make an interception, launched the ball out after the opposing team’s attacking ball has already stopped or gone past the ball of our team being attacked

These are not only invalid interceptions, but are also commissions of fouls！